Another movie that’s coming out in 2013 that I am super excited to see is Carrie starring none other than Hit Girl! She has a name, you say? Yeah well… I’m going to call her Hit Girl.

Carrie is the story of a sheltered girl with telekinetic powers. It’s like Mathilda, but only if Mathilda’s mom was a psychotic evangelical woman who referred to her boobs as, “dirty pillows” and drove Mathilda to burn her home town to the ground.

The original Carrie was one of my favorite movies to rent for slumber parties as I was growing up. I thought it was a really creepy story and it was probably the first movie I had ever seen that had a sad ending. Not to mention, at the time, Stephen King was becoming popular again. My friends were starting to read his books, and he had a lot of made for TV stuff coming out at the time like, The Stand. 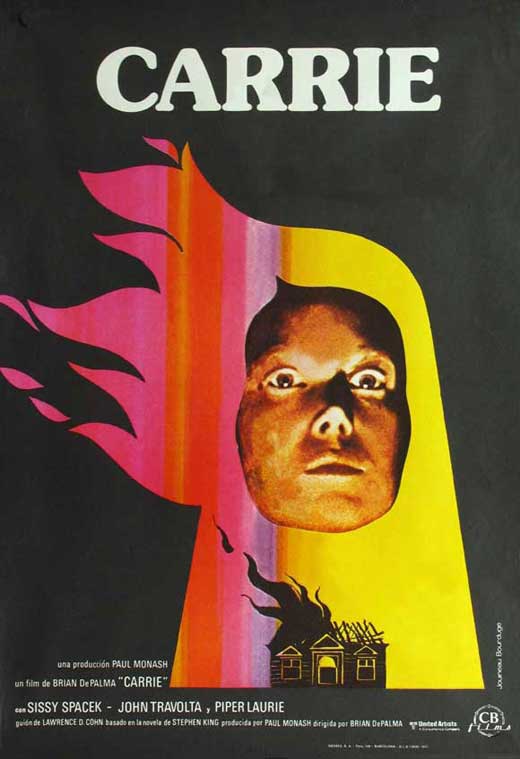 If you listen to our show, you’ll hear me bitch a lot about Stephen King’s terrible movies. In fact, I just had a small rant about Children of the Corn in our most recent episode. But I do consider some of his movies to be really good. He has a lot of good ones, and a lot of really bad ones, and the really bad ones would have been good if there had been more money involved in the making of them.

I consider Carrie to be one of his best. Right up there with IT, Shawshank Redemption, and  The Shining. The movie is a great story, and takes place in a world where special effects aren’t really needed to tell a good story, so they used their money elsewhere, and wisely so. It also paved the way for John Travolta’s rise on the big screen. Yes, this was his first full length feature. Before this movie, he had done a pretty good stint on Welcome Back Kotter, where he played a high school student who was too cool to care.

So anyway, I am really super excited, as I said before, to see this remake of Carrie. With all the things we can do with special effects now, there has got to be a lot more they can do with the movie.

So without further ado, here is the official trailer for the remake.