The Man From Earth

A friend of mine suggested that I watch this movie. His movie suggestions often aren’t the most entertaining of flicks, and usually play out like documentaries, granting some sort of philosophical things to think about. This movie, The Man From Earth was no different. 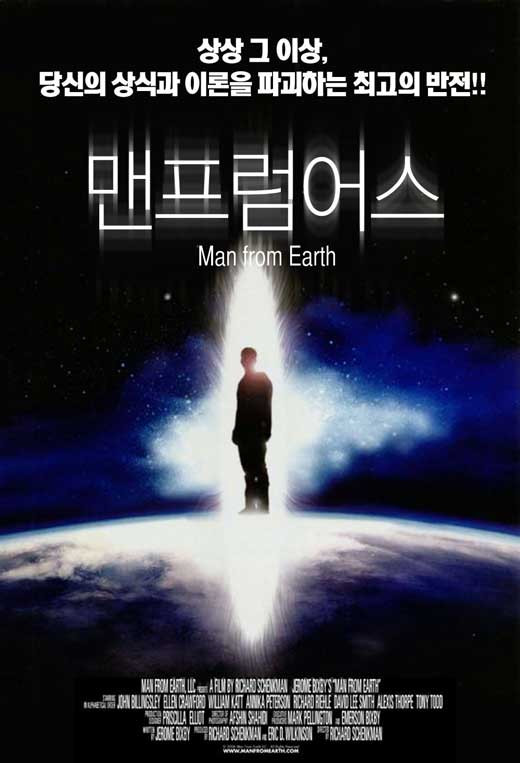 This movie is 1 hour and 27 minutes of a band of “intellectuals” sitting around a fire and listening to a story. First, let me describe the characters. We have our main guy, Dr. John Oldman who is the Mary Sue of protagonists. He is moving out of his house and the others are there to help. Dr. Oldman is a handsome, quiet, well-to-do guy who is seemingly pretty compassionate about others. He brought his colleagues or “friends” together this one last time to say, “goodbye”. He is leaving for good. Forever. He starts a “hypothetical” conversation about a science fiction story in which a caveman somehow lives through the ages and into modern times. Then he reveals that he is indeed this hypothetical caveman.

The other characters are cliche as all get out. First you have your black hippie who is all too eager for this crazy story to be true. You then have your angry white guy who’s so trapped in his own world view that he can’t even entertain the story as the fictional piece of work that anyone would have decided the story is. There is a young lady who this guy is obviously fucking, presumably one of his students, who is naiive and impressionable, and whose lines are all shouldered off as, “Aw how cute, the child has an idea.” There is a Jewish biologist who is obviously just there to give justification, however pseudo-scientific, to the story as a whole. His character entertains the idea but doesn’t believe it. An older woman is there to be the typical literalist Christian. There is a whole bit about religion, which I’m sure was the actual point of this whole movie. The woman is stubborn and won’t listen even to John Oldman who has revealed himself as the man who Jesus Christ was based on. This part resonates with the viewers, giving more weight to my argument that the whole movie is just anti-religious propoganda. There is another woman who has a crush on John and is sure that his story is true, but she wants to be with him anyway. Completely unconsequential character. Then the last character, played by Tom Smykowski from Office Space, is a psychologist who was called there by the angry man from earlier. His name is Will and apparently he is also one of their intelligent friends. He sees the story as nothing more than a story, and gives John a clean bill of health. As he should.

I do not understand why they even put so much into this. He doesn’t seem crazy, he seems like he’s trying to entertain them on their last day together.

Ok, so here are my opinions on the faults of this movie. First off, if all these so called intellectuals are so smart, then why on Earth are they even entertaining the idea that John is 14 thousand years old. He offers no sustainable proof. His story isn’t even that good. There is no reason to be so angry, Angry Man. Chill the hell out.

Next, they kind of drop the whole caveman idea when they get into the religion part. They could have told a wonderful story about this man living through the different eras of history, but instead, they drop it to shove their anti-religious opinion down our throats.

They could have been way more artistic with this which would have been more interesting. They could have had flash-backs with John living in history. They traded all that potential for bad acting and terrible puns. If I wanted to see a bunch of lame reaction thoughts, which were just a sad attempt at telling the viewers how they should feel about whatever was going on at the time, I could have had a bunch of my own friends over for a nice night of getting shitface drunk, with nothing but ourselves to entertain us. Our conversation would have been better and deeper. How on Earth did John get wrapped up with these lame friends of his? He is literally 14 thousand years old. You think he’d be a better judge of character.

Finally, I hate how every character was supposedly an expert in their field. I hate that there were experts at all. It wasn’t relevant to the story, and it is just a cheap story telling trick to use some kind of authority figure character to assert their opinion upon the viewer. This is very evident in a lot of internet e-mail chain letters. Often a professor will be used as the antagonist of a pro-religious story, or the hero of an anti-religious story, and an unwavering, faithful underdog will be used as the pro-religious hero character. Like little David trying to take down Goliath the Giant. It has been used for literally centuries. At this point, it is a dead giveaway to a biased story. Do something else storytellers!

So overall, I felt the story really dropped the ball. It could have been way better acted, better staged, and better told. So much wasted potential.