What I’ve been watching

I was trying to come up with a clever title for this post, but if figured I’d be better off just writing the damned thing.  I haven’t come across a movie that I have felt driven to do a full write up on in the past few weeks, but I have been experiencing a number of new films.  I have decided to do a series of quick responses to some of them. 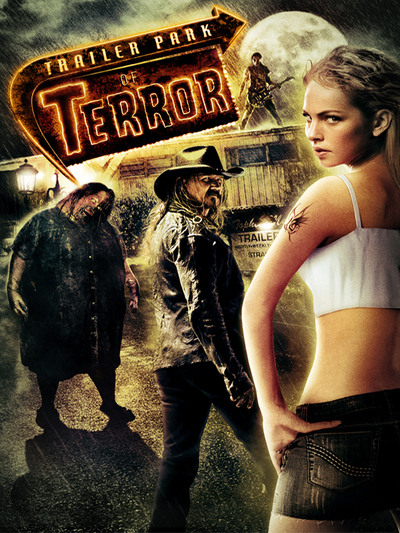 Ever wonder what would happen if a woman scorned makes a deal with the devil to get some bloody revenge on those who wronged her?  Take that premise, and set it in a trailer park, and you have Trailer Park of terror.  This movie feels a bit disjointed, as it changes the characters in the main focus after a decent length intro.  It pays off in the end with Zombie hillbillies forcing their victims into odd sex tapes, impromptu demolition derbies, and beef jerky recipes.  These wacky scenarios and more add up to a very  enjoyable flick.

This movie has pretty much the same premise as Hellboy.  Nazis play with the occult and summon a demon they cannot control.  The difference is that this demon is a shape shifter that takes the form of your loved one to lure you to your demise.  This starts fairly slow, but that could just be my general disdain for war movies.  Once it gets going there is plenty of gore, and an interesting occult element.  Pair that with the tension between the Nazi and English soldiers and you have a pretty compelling watch.

This is one of the better not in house Troma Films.  It centers on a girl who has to kill her serial killer boyfriend and ends up a little socially awkward as a result.  In an attempt to come out of her shell a bit, she agrees to come to a sleepover with a couple of girls she doesn’t seem to know that well.  Though things seem to be going well, wouldn’t you just know it, a large number of homicidal inmates escape the local insane asylum.  As luck would have it they focus their collective murderous energy on the house hosting the slumber party.  I enjoyed the overly campy vibe of this film.  It doesn’t take itself seriously and it goes to an interesting place by the end.