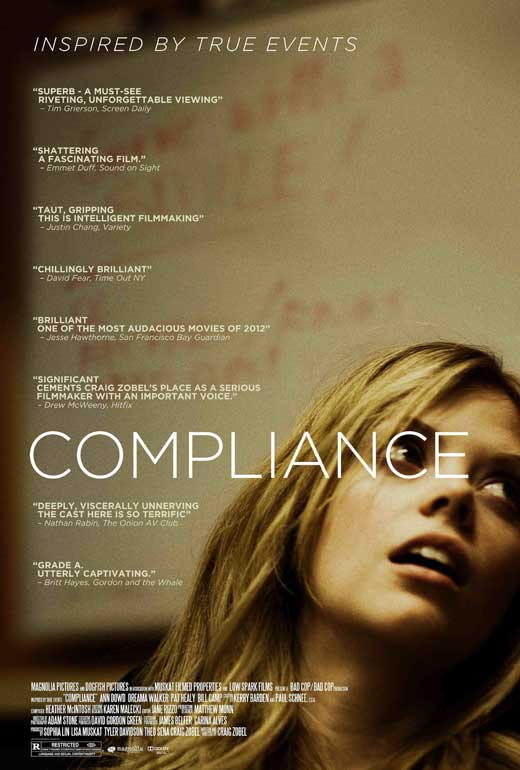 A new movie has found its way onto the magical that is Netflix entitled Compliance. This movie is about a shocking story of a girl who is strip searched and raped at the fast food restaurant where she works.  The term ‘Superfucked’ comes to mind.  The movie certainly builds some uncomfortable tension, however, the most disturbing thing about this movie is that it is based on a true story.  If this film strikes you as disturbing, remember, that everything on screen is a fairly accurate account of what actually happened.

The story goes thusly.  A restaurant manager gets a call from a police officer claiming to have gotten a report that one of the cashiers had stolen some money from a customer. Based on this accusation, and on direct orders from the ‘officer’, the manager took the girl into a back room, strip searched her, and refused to return her clothes.  From there they went about the process of finding male after male to watch over her until they found one that the ‘officer’ could manipulate into having her perform some perverse acts including, but not limited to, nude jumping jacks and being spanked.  It takes most of the day before somebody has the presence of mind to stand up to the man on the phone and bring an end to this mistreatment.

The title is quite fitting, as the overarching theme of this film is how willing otherwise reasonable people are to do horrible things to one another in the name of obeying authority.  Knowing ahead of time that the caller is not who he claims to be, it is easy to see how he utilizes a small amount of information to coax the manager into give him the remaining details he needs to make his story seem legit.  This, paired with the way he slowly breaks the girls spirit to the point that she willingly submits to some of the later outlandish requests, makes for a truly uncomfortable cinematic experience.  You’ll walk away from this movie with your faith in humanity at an all time low.  If, however, you are like me and never had much faith in mankind to begin with, it is definitely a fascinating watch.