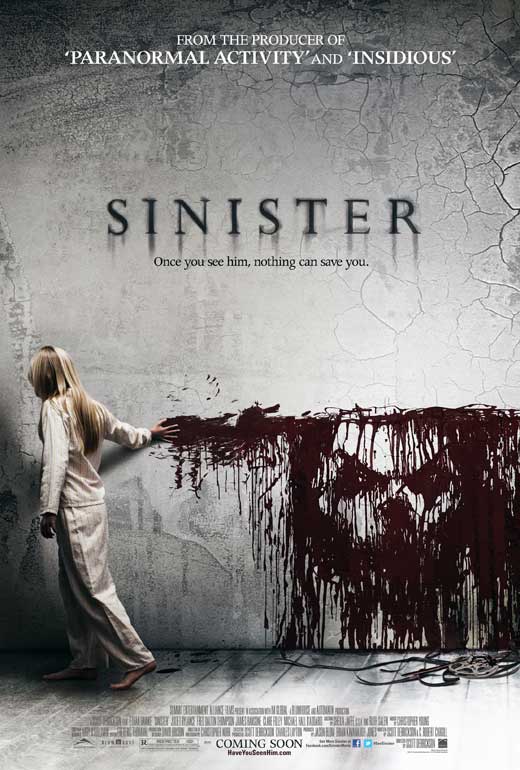 get this poster and more at MoviePosterShop.com

I just got home from seeing Sinister, and I have to say it is probably one of the best horror movies in years. I mean that. Years. It is absolutely scary and twisted. After a string of craptastic strings of movies like Paranormal Activity, Saw, and Final Destination, and tons of rehashed remakes and new installations of classic slasher flicks, this movie was definitely a welcome change.

This movie starts out with a family who moves into this new house. The father is a true crime genre writer, and they moved into the town where a family was murdered so he can write his new book. While unpacking their things, he finds a box of home movies in the attic. Turns out, these movies are snuff films of families being murdered all over the country. There are about 6 or so different films; each of a different family.

One of the films is of the family who used to live in his new house. So he thinks he’s stumbled onto this huge thing that the police overlooked. Clearly this is going to be the biggest story he’s ever written, and he’s going to uncover all sorts of mysteries. Then things start to happen at night.

So he’s got these snuff films and the projector locked up in a safe box, but in the middle of the night somehow they get out of the box and set themselves up and the projector turns itself on, and only wakes up the dad. Also, the 11 year old son starts having night terrors. Lots of kids have night terrors, which are like how you would expect people to react if they can’t wake up from a nightmare, but they never remember having them the next morning. They’re just really horrible for everyone else, because it’s pretty hard to wake up the person having them, and the person having them is likely screaming and likely sleepwalking. Trust me, they’re awful, my little sister used to have them when she was about 2. But kids are supposed to grow out of them way before they’re 11. And to top it off, the dad starts to see the boogeyman in still images of the films.

I think that the actors did a pretty good job at playing the characters. I’m not really one for Ethan Hawke, but he was excellent. Even the child actors were fluid, and realistic. I hate it when child actors sound like they’re reading off of cue cards. Hate that so much, but that didn’t happen here. I did have a little bit of a problem with the mom being English. I know the actress is actually English, but usually they tend to hide their accent when they’re in movies that don’t require their character to be English. Or they at least usually mention a little bit of background to explain it away. It’s not that i’m against English accents, I’m just saying that it caught me off guard, and took me out of movie mode.

Overall, this movie was great, and I recommend it.